Netherlands: Sermon calling for jihad and martyrdom preached in at least one Turkish mosque

Netherlands: Sermon calling for jihad and martyrdom preached in at least one Turkish mosque

Yes, in a few years, the people who attend this mosque will be loyal, productive members of Dutch society. Won’t they? The Netherlands, and Europe is general, is teetering on the edge of the abyss.

Here is the Turkish text of the sermon, and here is an English translation: 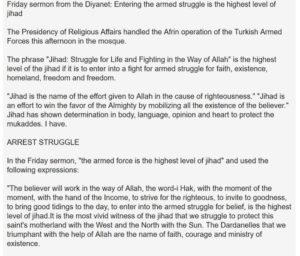 “Jihad preaching in Hoorn,” by Silvan Schoonhoven, translated from “Jihadpreek in Hoorn,” De Telegraaf, February 17, 2018 (thanks to VH):

Hoorn – A war sermon about jihad and martyrdom dictated by Turkey was presented in at least one Dutch mosque yesterday. In Hoorn, from the pulpit came the declaration that the Turkish army was fighting a sacred battle and that Turks should strive for martyrdom.

These links and any other content or links on this website are provided for information only. No warranty is provided regarding their accuracy, and no liability is accepted for reliance on them. Sharia Watch UK is not responsible for the content of external sites. We do not necessarily endorse any or all of the views expressed on these external sites.